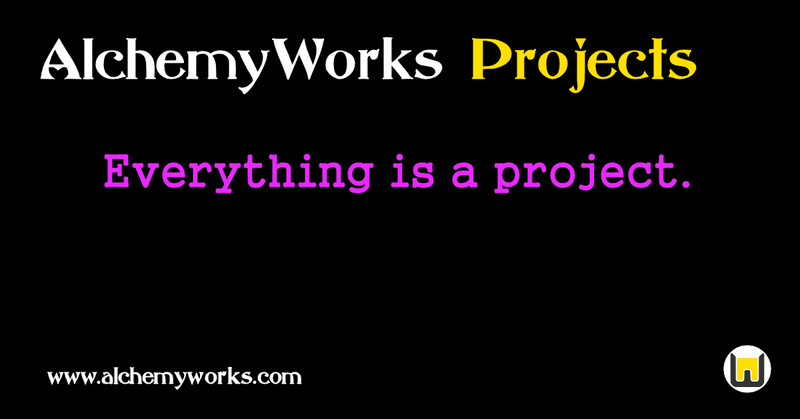 Everything is a project

Often the first question when trying a new project management system is "Where do I create the projects ?", followed by "How do I setup tasks ?", and "Where do I record activity ?". To answer these we first have to clarify the nature of projects and tasks; in AlchemyWorks Projects, everything is a project.

With conventional project management systems you have portfolios of projects, which consist of tasks which may perhaps be broken down into sub-tasks. Dependencies exist between the tasks, and this constrains scheduling sequence.

In AlchemyWorks Projects this distinction between tasks and projects does not exist. Projects are arranged in a hierarchy and each one can be broken down into sub-projects to an arbitrary depth, which can be as simple or complex as required. A project may be just a title with perhaps an estimated duration, but it could equally be a significant project phase with multiple participants, risk and change management, versioned document tree and resources such as meetings, associated companies or products.

At the other end of the scale, towards the root of the project hierarchy, projects could represent product lines, departments, locations or even companies. By filing and grouping in this way it is possible to gain intelligence on time and fiscal metrics at any level, from corporate grouping down to individual projects. Each project accumulates metrics such as estimates, work completed, work remaining, costs from activities, credits and debits. These all percolate up through the tree and the aggregate values can be reported on.

It is natural for human beings to solve problems by breaking them down into smaller problems. The same is true for projects, for example a department may have a number of projects on the go. After creating a new project for this department, the first step may be to break down into phases, such as setup, operation and closedown. These phases can then be broken down in detail. The hierarchical structure of AlchemyWorks Projects makes it natural and easy to do this.

Regardless of the tree structure chosen, all projects share the same capabilities and controls. All projects can have scheduling dependencies defined, including to projects outside the local tree. Most projects will have an owner, priority and status. The status codes can help with reporting and navigation, for example if simple tasks have a different status code than main projects, then these projects can be reported on without the distraction of task detail. Also if a different code is used for milestone tasks, then these can be reported on separately.

Before we forget, let's answer those initial questions! Projects are defined within the project tree, either at the root level, or lower down. Tasks are just sub-projects created within a parent project, and activities are recorded within the events tab of a project. The events list is a combination of all manual activities such as time spent on the project, as well as an audit log for property changes such as owner, priority, etc.

It does take a little getting used to, terminology gets ingrained, so explaining to a project manager that tasks and projects are the same thing can lead to a blank look, before going on to explain that the department they are working in is also a project - but in AlchemyWorks Projects, everything is a project!